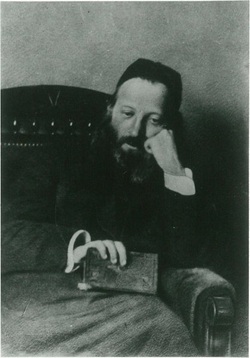 All of the Plague Has Turned Pure White

Within the totality of the world--
Both this-worldly and spiritual--
The only evil to be found
Is that which exists
In its isolated state.
But in the gathering of everything,
Everything is good—literally--
Not because evil is nullified into the majority
(As the desiccated accounting would have it),
But when seen from the perspective
Of the value
That is independent and ideal.

From this, you can understand
That to the degree
That the quantity of movement
Toward wholeness grows,
Evil decreases
And goodness is revealed.
Not only that,
But the gathering of evil in all its parts
Appears as the depths
Of a very great goodness,
Connecting in the depth of the heat of its yearning
To total goodness,
With which evil will not abide--
“All of the plague has turned pure white.”

The life that is hidden
In this eternal point of view
Is what maintains the world,
Placing a bandage on the face
Of all destructive forces,
Not allowing them to cause
The world to totter.
“And he will guard heights upon heights.”
Orot Hakodesh II, p. 454

The Purpose of Evil

We see the evil within the individual and in the life of human society.  We find that with all its negativity and evil, it has a purpose—a temporary purpose.  Evil contains particular power, the might of will and the depths of life.  These are necessary components with which to perfect virtue and goodness.  And we are assured that in the end, the evil will pass.  The individual will be perfected and society will be perfected.  Then everything will stand upon the basis of goodness.  Evil will evaporate, and the yearning of evil, the wrath, the murder, the coarseness, and all their offshoots, will evaporate like smoke.
The same process applies to the entire world.
Without any doubt, this power of evil hungering for evil causes upheaval in the world.  It rules and is filled with force, all the days of evil, as long as the world requires the evil upheaval, the universal evil-doer hungers, with all his branches, to exterminate and destroy, to poison and pollute, to darken and blacken, to separate and explode.  And he extends his evil until the final time, until the world will be perfected, until a new spirit, a spirit of pure life, will breathe upon human beings, when holy souls will awaken for the endeavor of true liberation, and take refuge the kingdom of supernal holy ones.
Everything mentioned in the words of the sages—all their puzzling sayings regarding evil and its existence, regarding its temporary power and force, regarding its destruction and annihilation in the end of days—it is all is sealed in a writing of truth.
Orot Hakodesh III, p. 478

The World of Humanity

Spiritual idealism knows nothing of quantitative separation.  It recognizes only inclusivity and unity.  It surveys particulars only as being a factor within the totality.  Therefore, it can only recognize an all-inclusive goodness.  And it can only recognize evil when it is all-inclusive.  And because an all-inclusive evil does not exist at all, and all-inclusiveness proceeds in relation to the manifestations in the form of time, for idealism does not considers and is connected to its unique point, but with its entire great outpouring, as a result, it comes to recognize that there is no universality to the existence of evil.  Rather, all is goodness.  “And God saw what He had made, and behold, it was very good.”
Physical mass creates a separation between existing objects and, automatically, their opposing natures.
As long as an awareness of good and evil exists, you do not have to connect your nature to this state of being: “he may not eat from the tree of knowledge of good and evil.” Only the tree of life, which is all good, is prepared for you.  Also prepared for you is: “Eat from the tree of knowledge of good and evil”—after you pass the many tests that you must go through, when your pollution is continuously cleansed, so that you are completely purified and your character traits are rectified, and the awareness of the tree of life again connects with you. Then the tree of knowledge of good and evil turns into a tree filled entirely with life and goodness.
There is no generation in which this great labor, clarifying awareness and the will in order to burn evil from its existence, will be completed. This is the foundation and maintenance of the world.  “Say to the tzaddik that it is good.” The world is renewed when the Torah is renewed. A revelation that comes in a limited form is a reduced condensation with no measure or value at all, after the spiritual and mighty waves have already gushed and gone by, descended from world to world, contracted again and again, until they finally appeared to us in the form of some revelation.
In its root, revelation is not individual, intellectual illumination, but global: the revelation of a new heavens, or a new earth—depending on what you dealt with, its worth and its content.
The same greatness that spreads through the soul, whose incandescence breaks down and weakens the frame of the letters, is the greatness that includes within its hiddenness all the details of the lights that illumine the letters.
To reveal the letters and their details, pray and direct your heart to our Father in heaven, Who is all-powerful, Who merges them together, the great and the small: “He sits on His throne, and gazes down on heaven and earth.”  From the supernal light of true prayer, the prayer of the righteous, a great light emerges from the region of supernal equality, where no light pushes light aside, but each strengthens and illumines the other.  This light, this dew of desire, causes all the letters, with their vowels and their smallest details, to sprout from that supernal illumination itself.
Orot Hakodesh I, p. 179

Our Soul Yearns for Total Goodness

What causes the continued presence of the idea of the existence of evil in the world?
Our point of view should be able to rise to a reckoning of a clear and inclusive world.  It should be able to observe a totality that is good and complete.
The idea of the existence of evil is merely a diminution of the illumination that is filtered through various levels.  As a result of that diminution, the soul asks: “Why can’t everything be exalted, completely good and great?”
We might respond that a division into levels is necessary for the improvement of the world.  But by saying so, we appeal to the idea of impossibility.  We are claiming that it is impossible to bring about perfection without division into levels.
However, claiming that anything else than such a division is impossible impairs our appreciation of the supernal, our sense of the ultimate and infinite ability of the Creator of everything.

When we arrive at the depth of the matter, we uproot the entirety of this misleading idea, this definitive statement regarding division into levels, which results in complaints about the narrowness of reality.
There are two reasons for [complaint].

The first reason [for complaint] is an internal one.
Through the true revelation of the all, the viewpoint of unity is revealed.  In unity, everything is truly great and exalted, without any smallness or diminution whatsoever.
When our eye is weary, we see smallness and diminution.  But even this has a [positive] consequence.  We are impelled to examine the basis of goodness, greatness and light.  We realize that our sense that greatness and light are the ultimate goodness and fulfillment is true—in its place.  What is that place? Wherever it is fit that infinite greatness and goodness be revealed.
But there are also places where diminution is fitting.
There, diminution and smallness themselves comprise the complete and total goodness—just as greatness does in its place.
Then everything rises and returns to a state of total goodness, which doesn’t require any measure of withholding.
The measure of withholding is a reality that appears dualistic: there are two aspects completing one other.  One aspect is like the soul and the other like the body.  Darkness perfects goodness, which is light.  There is no day without night.
Day and night provide the basis for the perfection of the framework of time.
If not for the darkness, which presents the viewpoint of separation, there would be no drive toward continuous ascent.
That drive is basic.  It perfects everything, until the quality of perfection in existence is no longer lacking: neither the [static] perfect quality that has no excess (and certainly no lack); nor the perfect quality that constantly adds perfection and that diffuses a constant, never‑ending pleasure.
If not for the viewpoint of separation, we would only be aware of the quality of completeness.  There would be no progress, no renewal of ascent.
And so the diminution, which causes the renewal of ascent, is literally complete good, like complete goodness itself.  From the aspect of that diminution’s ultimate supernal, infinite perfection, it has no connection to addition and ascent.

There remains only the feeling of pain and sorrow.  We ask regarding this feeling: Why does it exist?
Sorrow is ameliorated in two ways.
The first is by accepting suffering with love.  That is the level of supernal consciousness.
The second is by attaining a supernal viewpoint that transcends consciousness of belief in the quality of goodness.

And so, everything is truly the measure of goodness, with no necessary conditions, no necessary circumstances.
This will certainly be revealed in the messianic future.  At that time, we will make the blessing on everything, whether apparently good or bad, “He is good and does good.”   At that time, God’s name [of compassion] will be pronounced just as it is written [when it indicates strictness].

Beyond the Tree of Knowledge